I’m reading a book about death at the moment, the unforgettable memoirs of Sue Black, a world-renowned forensic anthropologist and anatomist who was also the lead anthropologist during the War Crimes investigation in Kosovo. She, more than most, seems qualified to talk about death, but her book deals predominantly with the vital subject of life- who we are when we are alive being something we should focus on more that what happens to our mortal shape after we die.

In particular, there is one chapter that affected me more than I’ve been affected for a while upon reading. In it, Black talks about the death of her beloved Uncle Willy, and how she was tasked with the undesirable job of making sure Uncle Willy was fit for burial on the day of his funeral. She talks at length of the elaborate ritual she undertook to ensure Willy was, in fact, deceased and ready for his grave, a ritual that was both ridiculous and overzealous even by Black’s own admittance. But, she did it anyway, because she considered it her duty and because grief does funny things to the mind.

This moved me because of my own experience of death. It moved me because Black lays the details out for us to read in a plain, simple manner, without hyperbole or tragic prose, and it is incredibly refreshing. It moves me because it is brave, although Black may not see it as brave, she may just see it as a fact of existence: people die, and this is something we should be able to talk about. And it occurs to me, that, as a writer, and a writer of horror fiction, I have never, not even once, come close to dealing with this in any of my work. I have never written the truth of death, only the imaginary version. I have never written about what I experienced.

Why is that? Why can I write about monsters and shadows and murder and the shapeless, nameless terrors that lie submerged in the layers of our imagination, but not about the real things?

Why not write about the funeral?

Why not write about holding the hand of someone who was no longer alive?

Why not write about the things that shape us?

Ironically, for me at least, the deaths of those people we love the most go on to mould the lives of those left behind into new, profoundly different lives. Death can be a catalyst, leaving us changed beyond measure. Death, and the act of dying, is such an enormous concept, the biggest story of all, and here I am, a cowardly, cowardly writer, who has never, not once, taken the black bull by the horns and described how it felt to be in a room with a person I loved more than I knew how to express, and that person to be dead. 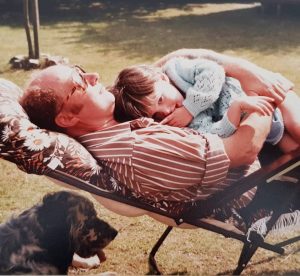 That person was my Granddad. He was, essentially, my surrogate father. My real Dad skipped out when I was a toddler, remarried several times, and was a stranger to me until I arranged to meet with him at the age of seventeen, which is also something I should probably write about, and don’t.

My Granddad did all those things a good Dad should do: disciplined me when I misbehaved, picked me up when I fell over, threw me into piles of dead leaves in the autumn, let me ride upon his shoulders, watched movies with me, pulled funny faces, went for long walks, taught me how to use a lathe and turn wood, explored abandoned castles and fortresses with me, skipped stones across the surface of the sea, watched the sun sink low beneath the Norfolk skyline and told me that if I listened hard enough, I could hear the great orange ball of fire hiss as it hit the water (a line he pinched from the movie Blue Lagoon, and my love for that film now knows no bounds). He was by intervals taciturn, in that uniquely Norfolk way, and extremely, if privately, expressive (after he died, I found a notebook of his filled with transcribed poetry, and I didn’t even know that he’d read poetry). He loved nature and Pavarotti and being outdoors. He hated spaghetti (“who the bloody hell has time to eat this stuff?”) and cities made him bad-tempered, because, he said, it was impossible to walk anywhere- he would quote a line from a James Herriot book, where a hardened country bloke of the same ilk moaned about only being able to take “big steps, and little uns” instead of walk properly, because there were “too many bloody people everywhere”. He was a stickler for rules and an avid respecter of authority, lover of giant ice cream cones and jacket potatoes, and die hard Morecambe and Wise fan, as am I. He is the reason I adore films the way I do: his eighties VHS library was a thing of beauty: Costner, Schwarzenegger, Connery, Seagal, Ford…he would watch my face to see my expression as we came to his favourite part of any film, and then gleefully rewind that section over and over until the tape became fuzzy with use. He never smoked, and hardly ever drank anything more than a shandy, unless it was Christmas. The only time I ever saw him with a hard spirit in his hand was immediately after he put our gorgeous English Setter Sam to sleep and buried him in the back garden.

Because my Granddad never went to school, he entered into trade after a short stint in the army. He became a builder and engineer, later going on to found his own engineering business, which my Uncle still runs (my Uncle, by the way, being part of a team responsible for the gorgeous copper petals that made up the 2012 Olympic opening ceremony). What I’m trying to say is that he was healthy, and worked a physical, hard job. A job which also left him exposed to the sun and, lethally as it turned out, a lot of asbestos, over the years.

And, because Fenland folk are unfailingly stoic and enormously uncommunicative, when a small lump appeared on his chest and continued to grow in mass and severity, he did nothing about it for five years, until, at last, he burst into tears in front of my Nan who marched him straight to the Doctor. The Doctor examined it half-seriously, told him he was more likely to die with it than because of it, and the mass continued to expand. Eventually, a diagnosis of cancer was made, by which point it had spread aggressively across his skin and around his body and attacked his lungs, those clean, brilliant lungs that had never sucked on nicotine but had, most likely, been harbouring the toxic dust from previous building projects and exposure to asbestos.

And so it was that my vital, healthy hero became a diminished, sick man, ravaged by chemotherapy. I do not want to talk much about that, because I prefer to remember him before this: striding through the banks of sea holly at Holkham, dogs running free at his heels, army cap low over his eyes, peacock tattoo proud on his strong, freckled arm.

What I should talk about is the day he died. I should talk about the call I got from my Mother, telling me to get in a car and make the journey cross country from Bristol. I should talk about the hushed hospital room he was in on the geriatric ward, a room which I now know to be a bad sign- you only get private rooms that are quiet when you are truly, truly ill in most British hospitals. I remember the gas mask over his face, his eyes half-closed in pain, the fumbling awkwardness of those that gathered around him. I remembered, vividly, being too afraid to tell him I loved him, because if I did, he would know how sick I thought he really was, and would think that I had no hope.

Hours later, he died, quietly, in his sleep. My husband thinks he waited for me. I have no idea if this is possible when a person is so close to death, but I like to think that maybe, he did.

I had a choice, when confronted with the horrible announcement of his passing. I could choose to see him, or not. I chose to see him. I suppose it was an important part of the grieving process for me, and subconsciously, I knew this. At the time, I don’t remember what I thought. I only remember free falling down a huge, endless chasm of loss.

For years after, I wiped the next ten minutes of my life from my memory. I wiped going into the room, the same room I hadn’t told him I’d loved him in, hours before.

I forgot about sitting on the edge of the bed next to him, carefully, in case I disturbed something.

I blanked out his tattooed arm, that faded peacock now bloated and swollen from the cannula and medication.

I forgot his face, slack and motionless, but, thankfully, no longer in pain.

I forgot how still he was, and the absence of him.

Because this is the thing about death: it renders those you love unrecognisable. So much of who we are physically is made up of our unique expressions and reactions to things. Our animation is intrinsically linked to our personality, and if you remove that, then all that is left is the housing for it, the case, discarded like the skin of a snake. We take so much stock in what our bodies look like and how they behave when the true essence of us lies in our brains and our thoughts and our feelings, and how we portray those. I knew, then, as I sat there and tentatively held his hand, which was cold, and shiny, and most definitely devoid of life; I knew that this was not him. I knew that he was there in my mind in all the ways I wrote about at the start of this essay. This was not him. This was just the part, the necessary part, that was left behind. He was the love he bore me, the lessons he taught me about living. He was the sun and the sky and the salty sea breeze and the smell of wood chippings and steel shavings. He was the taste of icecream and frost on an autumn day. He was the notebook filled with scribbled poetry, the sound of the sun hissing as it hit the sea at sunset.

I say I knew: in reality, my brain struggled to process this information for many, many years. But looking back at it now, twelve years later, I can accept it for what it was: a confrontation with death that became the single most defining thing in my existence until my son was born. Then, because all we are really is life and death, the act of giving birth reset my boundaries and understanding of myself and my place in all of… ‘this’.

I never wrote about any of this in my books or my stories because I was afraid. Exposing a personal tragedy in this way and using it as a literary device is tantamount to telling a perfect stranger all of your deepest, darkest secrets within moments of meeting them, or so I used to think.

But I’m reading this book, and in this book a brave, incredible woman is painting a different picture of death, a picture that we should hang upon the wall proudly instead of shutting it away in the attic, and I, for one, think I need to change how I write about the dead and the dying.

How, I am not quite sure yet.

But I have an idea. It starts, as most things should start, with celebrating life.